“You Complete Me”: Finding Your Soul Mate 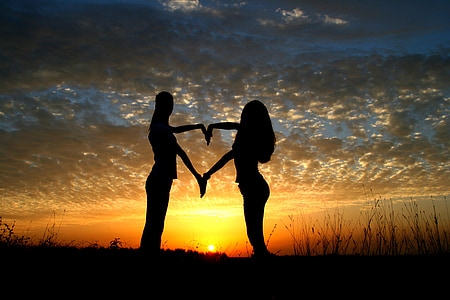 Your best friend set you up on a blind date. You consider canceling, but your gut tells you to see it through. When you arrive at the restaurant, despite never seeing your date before, you pick him out of the crowd instantly and he waves you over. The hours melt away as the two of you find you have a lot in common. You begin to feel like you have known each other for much longer than just this evening. There is an instant connection that you can’t quite describe. It may be that you have just met your soul mate.

The term “soulmate” implies a mutual affinity or powerful bond that exists between two people. The origin of the term “soul mate” can be traced back to a parable first told by Plato in Symposium:

In the dawn of time, there were originally three different types of round beings. One type was male connected to male. The second type was female connected to female. The third was androgynous with a male connected to a female. This round creature had to roll around like a ball in order to move around and across the Earth. One day, these round creatures decided to attack Zeus up on Mount Olympus. They lost. Zeus cursed them by splitting them in half and scattering the halves across the world. Their split halves, now feeling less than whole, were doomed to wander until they found their original missing half in order to become whole again.

“[When] a person meets the half that is his very own,” he exclaims, “something wonderful happens: the two are struck from their senses by love, by a sense of belonging to one another, and by desire, and they don’t want to be separated from one another, not even for a moment. These are people who finish out their lives together and still cannot say what it is they want from one another.” (Aristophanes from Symposium)

Every point in history, from the ancient Greeks to the dawn of Christianity and even modern Hollywood movies emphasizes the importance of finding one’s true love. It surpasses the desire for wealth, worldly goods, and fame. Finding someone who just “gets” you – knows when to give you space and when you need extra attention and respects all the boundaries in between can seem unattainable until that one day it just “clicks.”

While being introduced to your soul mate will not guarantee happiness; in fact, it may not even guarantee true love, it is a journey worth taking. That person may become your spouse, or they may be the best friend you ever had. They may be neither, but become someone who teaches you a powerful lesson about yourself. Your soul mate is someone you may encounter through multiple lives. It is almost certain you will meet, but it’s up to you to recognize each other.

Are you not sure if you’ve met your soul mate yet? As a psychic advisor, I can help you. Call or email me today to schedule your private, personal reading.