Home > Blog > Psychic Reading > How to use smudge sticks for spiritual cleansing.

How to use smudge sticks for spiritual cleansing. 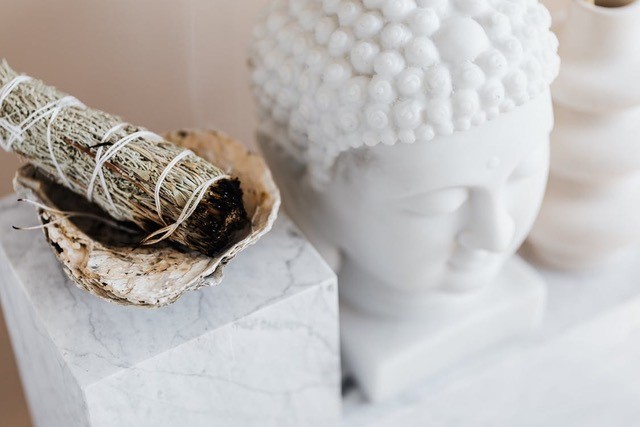 While the practice of burning tightly woven bundles of sage and other herbs to cleanse
negative energy in a room may seem like a “new-age” type of practice, it’s origins actually go
back thousands of years and are drawn from ideologies borrowed from Asian, European and
even Native American Cultures.
Traditional incenses are fragrant resins, like frankincense and myrrh, that can be traced back to
ancient Egypt where they were thought to be burned to fumigate tombs and ward off evil spirits
and the presence of demons during worship and other rituals.
India, the world’s main producer of incense today, has promoted the use of incense for worship
in Hindu rituals since about 3000 BC. From India and South Asia, it was believed to migrate to
use in China. Trading routes brought the popularity of incense to Europe, Arabia, the
Mediterranean and Japan by the 5th and 6th centuries. 14th-century Samurai warriors were
reported to burn incense around their helmets before battle to protect and sanctify their heads
in the event of decapitation during war.
Native Americans both past and present have similar practices burning herbs such as white
sage as well as tobacco, cedar, and sweetgrass in bowls for purification and other religious
ceremonies. These practices were likely adapted by early settlers as there are references in
early 19th and 20th century texts referencing sage smudge sticks as an effective form of
mosquito control. European smudging traditions combined with early American influenced the
Wiccan practice of using smudge sticks in rituals and to cleanse environments of negative
energies.
The principle behind the use of smudge sticks is that releasing the plant-based positive energy
through burning will drive away any negative energy or residual spirit energy that may be
trapped in a room or attached to a person. When doing this, it becomes more effective when
the right herbs are used.
White sage is the most traditionally-used plant for smudging. It is most often used for
purification, cleansing, and meditation. However, since it is the plant considered a sacred herb
in many Native American societies, it is sometimes seen as cultural appropriation if used by
other cultures. Other sages can be substituted appropriately.
Lavender has a more pleasant aroma and is often used for psychic protection as well as
cleansing. It is thought to increase one’s own psychic energy and connection to the spirit world
and has uses for psychic healing, relaxation, and elevating one’s mood.
Juniper can be used to increase energy and invigorate and is also used for purification and
prayer rituals.
Mugwort has been used for centuries to relieve pain and cure depression as well as to aid in
intestinal and digestive illnesses. Ingesting too much mugwort can be toxic, but burning it in a
smudge stick has been thought to induce vivid dreams so many will burn it just before
bedtime.
The ritual for smudging is also important. Assemble your smudge stick or bowl and match,
lighter, or candle. If the weather allows, go around and open all the doors and windows of the
house or space. Make sure you have eliminated any distractions (like nonsupportive on-lookers).
The following are instructions borrowed from desertusa.com:
Begin at the back of the house and work your way to the front. It’s important that you end in an
area that has a door. You will want to finish by “sweeping” the smoke out that final door.
Calm yourself and get ready to begin. Start off with a prayer, or with meditation to focus
your intent. Ask for the release of negativity in your space and in your life. Plan to carry
matches or a lighter with you, to relight the smudge stick if it goes out. Begin by
smudging yourself. Waft the smoke around you as if you are washing yourself in it.
Smudge anyone else who is participating with you in the same way.
Next, waft the smoke into the corners of the room and into the open closets. You can
keep your mind clear, or think or say whatever feels appropriate to you, like “I cleanse
this space” or “Higher Power, help me cleanse this space.” Your intent is the important
thing here. Imagine stuck energies dissipating and exiting through open windows or
doors.
Finish one room, then proceed to the next in the same fashion, not forgetting hallways
that you may move through. Cleanse them too. Be sure to smudge any mirrors,
cleansing the way you see yourself, or others see themselves. Smudge the fireplace,
the hearth of the home, and the oven in the kitchen.
If the smudge stick goes out, simply pause and relight it. As you approach your final
room, with the door you are going to end at, imagine any remaining negative or stuck
energy dissolving all around you. Use your hand to gently blow the smoke out the
doorway. Envision any lingering negativity exiting through the door. Say, or think
whatever comes to you along these lines: “I release all negativity now,” “Higher Power,
thank you for helping me cleanse my space and myself,” or anything that feels
appropriate to you.
Carefully, crush the smoking smudge stick into the fireproof bowl or the earth outside.
When you are sure all the ashes are cold, give them to the earth. Close all your
windows and doors. Relax and enjoy your cleansed space.
If you are unsure of how to begin or would like to discuss other methods to cleanse
negative energies, contact Your Life’s Direction for an appointment.
Resources: